Activists discuss why the fight in Minnesota matters here

Across Wisconsin’s western border with Minnesota, Indigenous people and allies have united in months of resistance against the Enbridge Line 3 pipeline. For those who have traveled to the resistance camps, what’s at stake is clear. It’s a struggle not just against a defiant fossil fuel industry, but also against what some call “the Great Sorrow.” That’s what Russ Bennett, an environmental activist who has traveled to the Line 3 camps several times, calls the gloomy consequences of climate change.

Bennett became aware of the controversial Canadian oil pipeline project through his work with the activist group Extinction Rebellion, and then through 350.org’s Madison chapter. After growing up around Native American communities in central Wisconsin, Bennett feels Line 3 boils down to a very fundamental issue “about the rights of the Indigenous peoples up there to not have this pipeline built through their territories,” he told Wisconsin Examiner.

The other fundamental issue is the science of climate which Bennett said is, “so innocuous sounding but, in fact, I would say it should be called the Great Sorrow of what’s unfolding and what’s going to be unfolding even faster.”

“The science says we’ve got to get off of fossil fuels,” he added. “And here we are ostensibly repairing or upgrading fossil fuel infrastructure with Line 3, and yet it’s virtually doubling the capacity. So it’s actually expanding fossil fuels, rather than getting off of it.”

Although the pipeline and its profits belong to a Canadian company, portions of Line 3 stretch into the U.S. Built in the 1960s and running 1,097 miles long, the $2.9 billion pipeline runs from Edonton, Alberta to Superior, Wisconsin. The current plan involves replacing portions of the pipeline, including 13 miles in North Dakota, 337 miles in Minnesota, and 14 miles in Wisconsin. If completed, the pipeline would carry 760,000 barrels of heavy crude per day from Canadian tar sands fields into the U.S, crossing through treaty-protected Indigenous territory.

In 2016 an Indigenous-led resistance movement blocked the Dakota Access Pipeline (DAPL) from running through indigenous lands and water sources. Thousands of people descended on North Dakota to disrupt the pipeline’s advance. They were met by law enforcement and private contractors. Riot lines formed by police pushed back water protectors using tear gas, rubber bullets, water cannons and other tactics. Federal agencies such as the Department of Homeland Security also participated. Then came private contractors, some directly hired by the pipeline company and some working alongside police to conduct surveillance.

Many of those same scenes are now playing out in Minnesota at the Line 3 resistance camps. Hundreds have been arrested since construction began in December, with detainees reporting strip searches, hefty charges and stints in jailhouse solitary confinement. Additionally, it’s now known that law enforcement received $500,000 from Enbridge for pipeline-related work. Although no resistance camps have formed in Wisconsin, Gov. Tony Evers signed a bill in late 2019 making it a felony to trespass on a pipeline.

Indigenous female leaders are among those arrested, detained, and injured in Minnesota. Tara Houska, a water protector and founder of the Giniw Collective, condemned both Minnesota’s governor and President Joe Biden for what she and others have experienced on the ground.

In a statement on Sept. 3 Houska decried the shows of force used against water protectors. “As I sit with scars caused by rubber bullets paid for by a tar sands company called Embridge and my friends tend to potentially permanent facial paralysis,” said Houska on Sept. 3, “elected officials continue to tout themselves as climate leaders. You can’t allow one of the largest tar sands infrastructure projects in North America through Indigenous lands and the Mississippi River headwaters and be a climate leader. Their silence is appalling.”

Actions on the ground against Line 3 continue. On Sept. 7, water protectors used multiple blockades at a major U.S. Canadian tar sands terminal in Clearbook, Minn., to further frustrate the pipeline’s operations. The mile-long blockade used boats, cars, barrels as well as human beings to block the roadway. At one end of the blockade, a group of grandmothers led solidarity actions. “We, elder women, stand in loving solidarity with our Indigenous relatives and all Water Protectors,” the group of five women—Ridgley Fuller, Trish Gallagher, Ellen Graves, Rema Loeb, Priscilla Lynch, and Paki Wieland—declared in a joint message. “We say to the Enbridge corporation, its stockholders, all their workers and to the President: STOP THE LINE 3 PIPELINE NOW!”

Jill Ferguson appreciates the special place older women hold in the movement, she said. The 68-year-old Wisconsinite joined water protectors in their teens and early 20s in Minnesota. Her first trip to the camps lasted from June 7-14, after she responded to  what she described as “an urgent S.O.S call” sent out from those already actively resisting the pipeline. With court remedies failing as arrests increased, Ferguson said she knew the water protectors needed all the help they could get.

“There were about 3,000 that came from all over the country,” Ferguson told Wisconsin Examiner. “They organized it so well. Their hope was that they could get 750 people to come, and they were blown away at how many people showed up.” Dubbed the “treaty people gathering,” the action involved indigenous allies demanding that the government uphold the conditions of land treaties that are  violated by the pipeline.

The June 8 treaty people gathering was the biggest action against Line 3 up to that point. Many protesters and water protectors were arrested during the actions while blockading access roads and chaining themselves to construction equipment. About 1,500 people also marched to where the pipeline was scheduled to drill under the headwaters of the Mississippi River, and established more camps on-site.

Ferguson was one of those arrested during the treaty people’s actions. “I would say about 75% of the people going up there are all kids in their 20s,” she said. Many told her they were scared for their futures because of  climate change.

“You’re in your 20s, right? You have a long road ahead of you, and this is not sustainable,” said Ferguson. “And so these kids have quit good jobs to go up there, and stay up there. They’re so committed to stopping this and understand the devastation of what this will be. I talked to a couple kids who got a free pass to college from their parents to be a doctor, a lawyer, whatever they wanted to be. And they said, ‘Why would I go to college for eight years and come out, and be too late to save the water, to save the climate?’ So they’ve put off college for this. It’s that important.”

Bennett traveled to Line 3 in March, July, and August. “In a way it’s beyond calling it a protest,” he told Wisconsin Examiner. “Because people have been up there for many, many months and people have been fighting this for so long. It’s something beyond calling it a protest when you have people living in camps next to the pipeline and actively doing whatever they can on a daily basis to slow or stop the pipeline from being built.” He called the task before the camp’s water protectors “both daunting and inspiring — daunting in that the pipeline continues to be built and being built at a very fast pace so that they can get it done as soon as possible. And inspiring because the people who are working to stop the pipeline are some people who are really trying hard to build a better world. One that doesn’t involve fossil fuels.”

As a grandmother, Ferguson felt called to do what she could in the resistance camps. She went back to the camps a second time  in July, and was arrested again. This time, she sustained injuries to her neck and back, as well as a concussion. She continues to be treated by her doctor for her injuries. Just before she was arrested on July 29, Ferguson tried to catch a wifi signal near one of the only reliable spots near her camp.

She was doing what she did every morning, making a brief video update on Facebook. When she tried to share her message about Enbridge and the protests, she was locked out of her account. “I took screenshots of it because I couldn’t believe it,” she says. 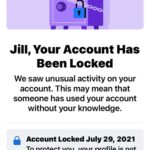 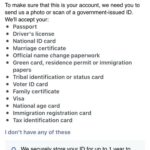 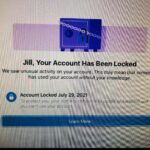 The message on her phone  said, “We saw unusual activity on your account. This may mean that someone has used your account without your knowledge.” The locking removed Ferguson’s profile from Facebook, and required her to submit identification such as a driver’s license, passport, voter ID card, tribal ID or status card, or other documents to get her account back She produced a copy of her driver’s license, she says, but remains locked out of her account. Bennett says he and other water protectors was followed and pulled over by police.

Despite the surveillance, the protesters remain determined, focused on the potential consequences of inaction. “We’ve seen the destruction of our rivers,” said Winona La Duke, executive director of Honor the Earth in a statement about Line 3 delivered on  a Sept. 3.

“We’ve had 28 frac-outs which have burned our wild rice and our rivers, and we’ve had 5 billion gallons of water taken from our people, in a time of the worst drought in the history of Minnesota,” La Duke added.  “Here we have a Canadian corporation that is not only a climate criminal in a time of climate chaos, but a corporation and a country which is now promoting violence against Indigenous peoples, a total denial of our rights to continue food security, existence, environmental eco-side damage, and certainly the violation of treaty rights and all agreements under our laws and under international laws.”

La Duke was  encouraged when  the United Nations took  notice of the Line 3 struggle. On Aug. 31, the U.N. Committee on the Elimination of Racial Discrimination issued a letter demanding that the U.S. government respond to allegations leveled by Honor the Earth and the Giniw Collective. “We are grateful that the United Nations is asking questions to the United States and we believe that good nations should uphold their treaties and good countries should not wage war on Indigenous peoples,” La Duke said.

Ferguson challenges others to mobilize, both on social media and physically as she and others have. “Now’s the time,” said Bennett. “We have to really have hopefully a joyous rebellion where when it’s all said and done, we have a better world.”