Attorney General Josh Kaul joined state legislators to announce two new bills on gun control. One bill would expand background checks. The other aims to establish an extreme risk protection order system in the state. “You have heard about these bills before,” said Kaul during a press conference Thursday. “You know that the vast majority of Wisconsinites, about 80%, support passage of this common-sense legislation. And that’s what this is, common sense.”

Kaul noted that while Wisconsin conducts background checks for gun sales, there are loopholes. Both online purchases and firearms acquired at gun shows present gaps in the background check system. “This legislation would extend background checks so they cover virtually all transfers of firearms in Wisconsin,” said Kaul. “So we know that when a Wisconsinite is buying a firearm it’s somebody who is not prohibited from possessing that firearm, and is instead somebody who can safely and securely possess a firearm. The extreme risk protection order would allow law enforcement or a family member to act when somebody has been shown to be a danger to themselves or others. These laws in other states have been passed, and have been shown to reduce suicide, in addition to providing a tool to prevent somebody from harming others.”

Kaul noted that the laws are particularly important during the pandemic. He pointed to the rise in substance abuse, isolation and mental health problems  as a result of the pandemic. “And we’ve also seen an increase in shootings,” he said.

Under the background check bill, firearms transfers would be prohibited unless the transfer occurred through a federally licensed firearms dealer and included a background check for the buyer. That would include transfers to a firearms dealer, law enforcement and armed services agencies, antique firearms, transfers of no more than 14 days for hunting or target shooting, as well as transfers which are considered gifts or inheritance to family members. Those who violate the law would be guilty of a misdemeanor, and could face a fine of $500-$10,000, and could face imprisonment for no more than nine months. Violators would also be unable to possess a firearm for two years.

The extreme risk protection order bill is perhaps the more controversial of the two. According to a co-sponsorship memo, the order would be issued by a court and function much like existing temporary restraining orders. Under those orders, such as for domestic abuse, people who may be at risk of harming themselves or others are unable to possess firearms. The order could be placed for one year, and could be renewed depending on the circumstance. The memo, which lists the names of over 20 legislators who support the bill, notes that some 56% of mass shootings and many instances of suicide display early warning signs. “But in Wisconsin there is no legal remedy to take action before it is too late,” the memo reads. It also highlights a 14% decline in firearm-related suicides in Connecticut, with 19 red and blue states having some form of red flag law.

Sen. Lena Taylor (D-Milwaukee) stresses that the legislation does not step on gun rights. “The simple legislation that we put forth, this is the voice of the people in Wisconsin,” said Taylor.

“Most of us have internal red flags that let us know that something is wrong, ” She added, explaining that red flag laws allow courts to act on information that someone might be a danger. “No, this bill will not end all gun violence,” she said. “But it does have the ability to save lives.”

“Gun safety and the impacts of violence are extremely important issue for my district,” said Sen. LaTonya Johnson (D-Milwaukee), “but it’s also important to people all across this state. They’re both important and complex issues because, like with healthcare, the more closely impacted you are by gun safety and gun violence the more it becomes a matter of life and death. And not some symbolic policy debate in Madison or Washington D.C. I think whether you live in the city, the suburbs, or rural areas, everyone comes to gun safety from a different starting point.”

For Johnson, a turning-point in the gun safety issue was the shooting of Sierra Guyton. The 10-year-old, third grade Milwaukee student was struck in the head by crossfire while playing with her 12-year-old sister. Guyton was taken off life support after some months in 2014. A 19-year-old, Sylvester Akeem Lewis, was convicted of reckless homicide for her death. Johnson noted the crossfire occurred “between two convicted felons,” adding that, “Sierra would still be here if it wasn’t for gun violence.” Johnson recalled going to her funeral, “and the last thing I remember was hearing the wails from her family as they flowed to that casket. It’s a sound I can still hear today.”

Johnson hoped that Guyton would be the last child funeral she’d attend in Milwaukee, but she wasn’t. “Parents should feel safe letting their kids go outside to play in the yard,” said Johnson, “and they should especially feel safe by allowing their kids to play on a school playground. The idea that we can’t both constitutionally protect gun rights, and also feel safe from gun violence in our communities is false.” Johnson condemned groups like the National Rifle Association, and others by mudding the waters in the debate. “Americans own 393 million guns. America only has 328 million people, and a lot of those are children.”

In 2020, over 3,000 guns were confiscated by the Milwaukee Police Department, Johnson noted. “An 18% increase from 2019,” said Johnson, “lax laws and loopholes have left my community riddled with guns. Combined with high levels of pre-existing poverty and stress of the COVID-19 pandemic, gun violence has spiked to a terrifying height. There were 189 homicides in Milwaukee last year, a 93% increase from 2019 and the most ever recorded. 89% of those homicides were shootings. There have been 140 homicides thus far this year, seven more than last year this time, 91% of those are shootings. We have to do something to prevent guns from getting into hands of the wrong people. Jacking up penalty for gun crimes hasn’t work, and is an after-effect. We can’t incarcerate our way out of this pandemic.”

While some Republicans officials have been keen to bash Milwaukee and Madison’s issues, it remains to be seen if any will support these new bills. At times, conversations around gun violence have been isolated to instances within the two cities, or used to push back against police reform rhetoric. In June, Rep. Janel Brandtjen (R-Menomoneee Falls) blamed the spikes on an alleged lack of police. Brandtjen invoked the children lost in such incidents, called the city’s “horrendous,” and suggested safety concerns were responsible for dwindling  funding to the cities rather than targeted GOP policies. Rep. Joe Sanfellipo (R-New Berlin) followed Brandtjen in bashing the city’s, and suggested deploying the national guard to Milwaukee over gun violence issues. 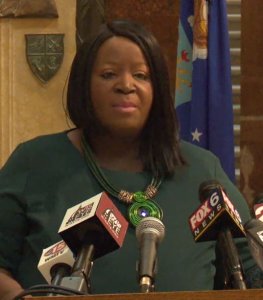 Rep. Shea Stubbs (D-Madison) shared similar sentiments. “Day after day, families in Wisconsin lose loved ones to the gun violence epidemic,” said Stubbs. She highlighted that in 2020, Madison saw 250 instances of gun violence, “killing more than the 2018 and 2019 combined tragedies.” From elderly people, to college students, to children, Stubbs was familiar with many of the names. “The shootings in our communities are not just articles in the paper,” said Stubbs, “they are lives. They’re lives that have been lost, they’re families that are forever changed and their hearts will never be healed. But it does not have to be this way. Why? Because we are right here in the state of Wisconsin in the state legislature, where we can make the change that is so needed.”

Sen. Melissa Agard (D-Madison) stressed that safety shouldn’t be an option divided by the political aisle. Like other elected officials, Aagard has met with constituents who’ve lost loved ones to gun violence. “These are not democrats, these are not republicans,” she stressed, “these are Wisconsinites who have begged and pleaded for change to occur in our state.”