Wisconsin Assembly Speaker Robin Vos sent a letter to UW-Madison Chancellor Rebecca Blank on Tuesday that attacks the university for a course required of graduate students that he says requires them to agree that “whiteness means privilege.”

Wisconsin Republicans have worked over the past year to prohibit the teaching of certain topics in universities and K-12 schools that they say fall under the umbrella of critical race theory — an academic idea that views American institutions through a lens of systemic racism. Earlier this fall, the Assembly passed a series of bills that attempts to prevent schools from teaching the harms of racism. The bill passed by the Assembly banned the use of a number of commonly used terms from classrooms. The state Senate has not passed the bill and it would likely be vetoed by Gov. Tony Evers.

Responding to a video posted online that features Republican candidate for governor Rebecca Kleefisch, Vos accused UW-Madison of forcing a viewpoint onto its students.

“I am appalled by the blatant attempt by UW-Madison to force students to agree with one set of beliefs to attend the University as a graduate student,” Vos’ letter states. “The students of our state deserve the opportunity to learn about different viewpoints and develop their own beliefs without being required to agree with one, narrow set of beliefs that the university tries to bestow upon them before they are allowed to register for courses.”

In the video, Kleefisch said that the material in question is a quiz through University Health Services that graduate students are required to complete before they’re able to enroll in classes. In his letter, Vos stated that he’s concerned about a mandatory “Graduate and Professional Students Preventing and Responding to Sexual and Relationship Violence” course.

Many universities, including UW-Madison, require students to pass quizzes about campus safety issues such as alcohol consumption and gender-based violence prior to enrollment.

The material, obtained by the Wisconsin Examiner, states that the course’s goal is to end sexual violence on campus. 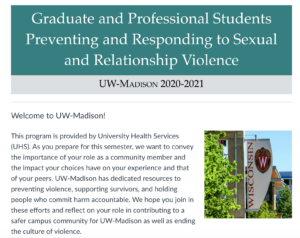 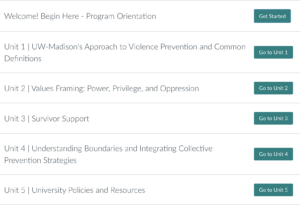 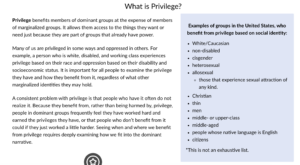 “As you prepare for this semester, we want to convey the importance of your role as a community member and the impact your choices have on your experience and that of your peers,” the introduction states. “UW-Madison has dedicated resources to preventing violence, supporting survivors, and holding people who commit harm accountable. We hope you join in these efforts and reflect on your role in contributing to a safer campus community for UW-Madison as well as ending the culture of violence.”

The five-unit course includes statistics about sexual and gender-based violence nationally and on campus. It also includes a unit called “Values Framing: Power, Privilege, and Oppression” that focuses on how members of marginalized communities are more likely to experience gender-based violence. That unit includes the portions Vos and Republicans have taken offense with.

“CRT helps us identify the systems that perpetuate racism and allow for women of color, people with disabilities, queer and trans folx, and other marginalized people to be disproportionately impacted by sexual assault, intimate partner violence, and sexual harassment,” it states. “Applying these frameworks can help us interrupt racism, sexism, ableism, heterosexism, cissexism, and other forms of discrimination that lead to sexual, relationship, and gender-based violence.”

Other units include lessons on how to support survivors of sexual violence, the university’s policies regarding consensual relationships and on-campus resources.

Vos said his problem with the course is that the material includes statements about “critical race theory and critical race feminism” and labels a number of demographic groups, including white men and native English speakers as privileged.

A UW-Madison spokesperson said that the course is not about critical race theory and all concepts mentioned are supported by academic research.

“To clarify, the training in question is a prevention education webinar called ‘Graduate and Professional Students Preventing and Responding to Sexual and Relationship Violence,’ not a training on critical race theory,” spokesman John Lucas said. “The webinar was developed in response to a 2016 American Association of Universities (AAU) survey indicating graduate students were not well-informed about campus policies and resources for sexual misconduct. Offering a webinar like this is an important part of the university’s sexual violence prevention efforts.”

“In the two-hour webinar, there is a brief reference to critical race theory and its influence on feminism,” he continued. “The concepts mentioned are supported by academic research, as noted in the citations. We will continue to review the webinar, as we do with all of our programs, and make any appropriate changes for Spring 2022. Graduate and professional students are encouraged to share any questions or concerns about the program or their participation with University Health Services Violence Prevention.”