Republican officials are pushing a new package of bills steering $25 million of federal American Rescue Plan Act (ARPA) money towards recruiting, training and equipping more law enforcement officers statewide. From providing $5,000 sign-on bonuses for recruits to creating grants for various equipment and medical tests, the package aims to remedy funding and staffing shortfalls experienced by law enforcement agencies across the state. Democrats responded to the news conference countering that if Republicans were serious about funding police they would have used the historic budget surplus to increase funding for law enforcement rather than turning to one-time pandemic money that Gov. Tony Evers has already allocated.

Dodge County Sheriff Dale Schmidt, joined by GOP legislators and fellow police officials in the Capitol on Tuesday, noted that such issues in police departments have been brewing for some time. Over 13,000 law enforcement officers are employed across the state, the lowest number in a decade. Schmidt emphasized that “law enforcement is not a career; it’s a calling.” He hopes that the bills will help “bring more people into the profession, into the calling, so that we can increase that number of people who are graduating, so that we can work to keep our communities safer, work to make sure that crime is on the decline rather than on the increase.” Schmidt added, “We can’t serve the people, we can’t do the things that our community needs us to do, and wants us to do, unless we have people filling those positions.” 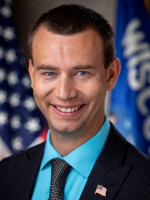 Schmidt thanked Speaker Robin Vos for “leading the charge on this,” though several other GOP legislators sponsored the bills and the ARPA funding is designed for one-time pandemic aid and is allocated solely at the discretion of Evers. Reps. Jason Born (R-Beaver Dam), William Penterman (R-Columbus), and Alex Dallman (R-Green Lake) attended the Tuesday new conference. Penterman highlighted the bill LRB-5525, which uses ARPA dollars to create $5,000 signing bonuses for police recruits, plus an additional $1,000 per year for prior out-of-state experience. Any officer who receives a bonus would be required to complete three years of continuous employment as a law enforcement officer in Wisconsin.

The sign-on bonus is capped at $10,000. Officers with one year or more experience already employed in the state would also be eligible for a $2,000 bonus, with half of the money coming from the state and the other from the local municipality. Another bill, introduced by Dallman, focuses on creating matching grants for small departments with less than 25 officers to purchase various kinds of equipment as well as medical tests. Other bills introduced simultaneously by Rep. Jesse James (R-Altoona) aims to establish new part-time police academy programs for at least two technical colleges. Penterman expressed his excitement to “work to re-fund — not defund — the police.”

It wasn’t the only time during the briefing that speakers connected the numbers of police statewide to the protests that followed the killing of George Floyd in Minneapolis. They repeatedly called it a one-time occurrence, not acknowledging the many police-involved shootings, particularly of people of color.

“What we witnessed, as a profession, was a condemnation of our entire profession for the actions of one,” said Chief Patrick Mitchell of the West Allis Police Department. “From that condemnation, people who consume the news got it loud and clear: If you’re a responsible parent, you got a 22-year-old child and you see that the world is saying that law enforcement is no longer honorable because of the actions of one, do you encourage your 22-year-old child to be a police officer?” Mitchell also said elected officials need to be “responsible in how they talk about our profession. We need our elected leaders to get facts before they talk. Facts should always drive the conversation, not emotion.”

Although protests were sparked by Floyd’s killing, many local marches focused on local cases of police violence. These included the three fatal police shootings which occurred over five years in Wauwatosa, the off-duty killing of Joel Acevedo in Milwaukee and cases involving people who died years ago and whose families feel the issues are systemic. Fatal shootings aside, issues like stop and frisk practices in Milwaukee have stockpiled distrust in the community for decades.

Chief Steve Rouix of the Rice Lake Police Department, in his comments during the Tuesday briefing, honed in on the pressure to hire quality personnel at small and large departments. “We need to continue to hire and retain quality applicants,” said Rouix. “And we believe we’re doing that, we’re finding them. I know in my jurisdiction it’s very difficult when you go through hiring process after hiring process, and you can’t find enough and you have to run another process, that all comes at a cost. Our communities expect us to have a high standard, which we do. We don’t want to lower our standards, but in order to get and continue to hire good people we need some change, some initiative. Because all of our communities want to continue to stay safe, and the only way we can do that is by having good public servants out there.”

Although Mitchell and other police officials note that staffing and funding issues have increased over the last couple years, the declines far predate Floyd’s death. That reality has been invoked on the Assembly floor before, when Republicans pushed bills to decrease local shared revenue funds in proportion to decreases in police and emergency services.

“After a decade of underfunding local law enforcement and municipal services, Republicans are desperate to blame anyone but themselves for the consequences of their decisions,” Minority Leader Gordon Hintz (D-Oshkosh) said in a statement. “Gov. Evers’ proposed 2019-21 and 2021-23 budgets included increases in state funding and his proposed 2021-23 budget included a voter approved local option revenue so communities could adequately meet their law enforcement needs.”

Hintz stressed that had the budgets been approved, “local governments would have received an additional $50,224,700. The 2021-23 budget alone would have increased state funding for local government by $34,557,700.” Republican legislators rejected the budgets, however, despite a state balance of over $1.6 billion. Funding the increases proposed in the budget would have cost about 2% of that budget.

Rep. David Bowen (D-Milwaukee) condemned the package presented Tuesday as “what false support looks like” and said it “is not the way to make new changes happen.” Bowen, who like other elected officials participated in protests following Floyd’s killing, said that he and other Democrats are open to working with Republican legislators to craft ways to retain officers and support communities. Instead, Bowen said in a statement, “my Republican colleagues drafted these bills in secret.” Neither he nor Evers was involved, he said or even made aware of the press conference announcing the bills until minutes beforehand.  Bowen also expressed discontent at the GOP “pitting law enforcement against the Governor and municipalities by promising officers and departments financial support using money that they have no control over. In what way is that a serious proposal?”

Bowen stressed that “Republicans are sitting on control of nearly $2 billion in general purpose funding, but instead are choosing to play political games by proposing new programs funded almost entirely by one-time federal ARPA funds that Gov. Evers has already allocated toward other comprehensive needs affecting Wisconsinites.” Republicans have frequently proposed dictating how Evers spend the one-time pandemic funding, including funding the ongoing needs of public schools, rather than using a record budget surplus they oversee to fund what they say is needed.

Rep. Jodi Emerson (D-Eau Claire) echoed Bowen’s skepticism: “This bill package is nothing more than an election year stunt from my Republican colleagues. The fact that Republicans look only to federal ARPA funds — which must be used for our community’s recovery from the pandemic — tells me they aren’t serious.”

Emerson highlighted that during the press conference, “Chief Mitchell stated the issue of police retention has been recurring for a decade. Police retention is thus an ongoing problem that requires sustainable funding and is not the type of COVID-19 issue ARPA was meant to address.”

“Republicans are also cherry picking which labor issue they want to address,” Emerson stated. “As we all know, health care workers, teachers, and other frontline workers are experiencing large labor shortages, causing huge strains on our health care and education systems. All in all, this package is a slap in the face to the municipalities that have been working hard to keep their communities safe while Republicans slashed funding left and right.”

How inequitable policies shape Milwaukee’s homicide rate by Isiah Holmes March 23, 2022
She helped create The Big Lie. Records suggest she turned it… by Cassandra Jaramillo June 9, 2022
The hypnotherapist and failed politician who helped fuel… by Megan O'Matz May 24, 2022