Rep. Tim Ramthun, addresses a crowd of election conspiracy theorists on Tuesday, Feb. 15. Assembly Democrats forced a committee vote on Thursday that unanimously kept Ramthun’s resolution to recall Wisconsin’s 2020 electors off of the floor of the Assembly this week. (Henry Redman | Wisconsin Examiner)

Assembly Democrats have attempted to drive a stake in the heart of a resolution from a Republican lawmaker who has demanded that his party recall Wisconsin’s presidential electors from 2020 — a demand that is impossible to fulfill and sparked conflict inside the Legislature’s GOP caucus.

The Assembly’s Republican leader twice publicly renounced the rogue resolution, but leaders of the Democratic caucus say that wasn’t enough to quell the measure. On Thursday evening, the Democrats orchestrated a unanimous vote by the Assembly Rules Committee that kept the resolution off the Assembly floor this week.

“We felt that it is crucial for there to be a clear answer to those people who are calling for the recall of Wisconsin’s electors: That will not be happening in the Assembly,” Rep. Greta Neubauer (D-Racine), the Assembly minority leader, told the Wisconsin Examiner on Friday.

Rep. Timothy Ramthun (R-Campbellsport) created a stir when he introduced a resolution on the Assembly floor last month for the Legislature to recall the 10 Wisconsin electors who cast the state’s votes for Joe Biden on Dec. 14, 2020.

Multiple audits and court rulings have all upheld the validity of Biden’s 20,000-vote win in the November election. Nevertheless, on Jan. 25 Ramthun took the unusual step of interrupting a vote on another bill to introduce his resolution (AJR-120) before the entire Assembly — apparently hoping to force an immediate floor vote on the recall demand. 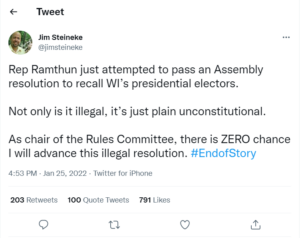 Instead the Assembly’s GOP leader sent the measure to the Rules Committee, which schedules legislation for the chamber. The committee chair, Assembly Majority Leader Jim Steineke (R-Kaukauna), tweeted from the floor: “Rep Ramthun just attempted to pass an Assembly resolution to recall WI’s presidential electors. Not only is it illegal, it’s just plain unconstitutional. As chair of the Rules Committee, there is ZERO chance I will advance this illegal resolution. #EndofStory.”

Assembly Democrats weren’t satisfied with that outcome, however. Republican leaders “had an opportunity … to make clear that it was not going forward,” Neubauer said Friday. “And instead they deflected by sending this resolution to our committee [the Rules Committee].”

Steineke had already batted down a similar Ramthun draft resolution in November, stating then: “There will be no action taken by the Assembly on this resolution.” In a Nov. 1 memo, the nonpartisan Legislative Council, which provides lawmakers with legal guidance, declared: “There is no mechanism in state or federal law for the Legislature to reverse certified votes cast by the Electoral College and counted by Congress.”

On Thursday, Assembly Speaker Robin Vos (R-Rochester) told reporters that local GOP party activists who want the election “decertified” have been told “time and time again [that] is unconstitutional and impossible to achieve.”

But that was an exception, Spreitzer told the Wisconsin Examiner Friday. “The only person on the Republican leadership side that was really saying anything here was Jim Steineke, who is retiring.”

“The Republicans have tried to play both sides,” Neubauer said Friday, “and have not been clear about whether they supported the resolution from Rep. Ramthun to recall Wisconsin’s electors.”

Ramthun supporters circulated the names of all the lawmakers on the Rules Committee, and Spreitzer, one of six Democrats on the panel, said his office was bombarded with calls and emails about the measure.

“I’ve had over 600 contacts to my office,” Spreitzer said. Democrats wanted to “make clear to these folks that this resolution is not going to move forward, and that it’s not just Jim Steineke that’s blocking it.”

After Thursday’s Assembly floor session, the Rules Committee met to finalize the coming week’s floor calendar. Spreitzer made a motion to put Ramthun’s resolution on the calendar, and Neubauer seconded it.

The motion failed unanimously — ensuring that the resolution will not come to the floor. Although Vos objected to Spreitzer voting against his own motion, Spreitzer said he had confirmed in advance with the Legislative Reference Bureau that nothing in the Assembly Rules or Robert’s Rules of Order prevented that.

“Every Wisconsinite should know where their elected leaders stand on the question of the legitimacy of the 2020 election,” Neubauer said Friday. “We thought that it was critical that Assembly Republican leadership be on the record on this issue for the integrity of our democracy.”

Neubauer said she hoped that the unanimous and bipartisan committee vote, with leaders included, would make it clear that the resolution will not go forward and put the issue to rest.

As Ramthun campaigns for the GOP nomination in the 2022 governor’s race, however, the doubts among a segment of the party’s voters seem likely to fester, regardless of the evidence.

In a TV appearance on Sunday, Senate Majority Leader Devin LeMahieu told WKOW Capitol Bureau Chief A.J. Bayatpour that Biden had more “raw” votes in Wisconsin. But he demurred on the question of whether the president’s victory was legitimate — saying “it’s tough to give a certain answer to that.” He cited changes in procedures that made it easier for people to cast their ballots in the COVID-19 pandemic.

Rebecca Kleefisch, whom Vos has endorsed for the GOP nomination in the governor’s race, previously said that Biden won the Wisconsin vote, but has since shifted her position, declining to say that the 2020 results were legitimate, according to the Associated Press.

Neubauer said Friday that Democrats would seek to end the partisan review of the election by former Supreme Court Justice Michael Gabelman, whom Vos has appointed.

“We will also be pushing back against the Republicans’ attempts to use misinformation about the last election to justify changes to our electoral system,” Neubauer added, and the caucus will not support any bills “that would restrict eligible voters’ access to the ballot.”

Spreitzer acknowledged that Thursday’s vote probably won’t change the minds of people “who have bought into the conspiracy theories” about the 2020 election. “But I hope it will at least send a signal that this Legislature is not going to take the action that they want.”