Photo by Joshua Woroniecki on Unsplash

The Republican Party of Wisconsin is distributing a mailer warning recipients that whether or not they voted is a matter of public record, and their neighbors will know if they don’t.

“URGENT” declares the mailer sent to a resident in an independent living facility in Madison last week, and presumably to many others. “Don’t Let Your Neighbors Know You Didn’t Vote. RETURN YOUR ABSENTEE BALLOT TODAY!” 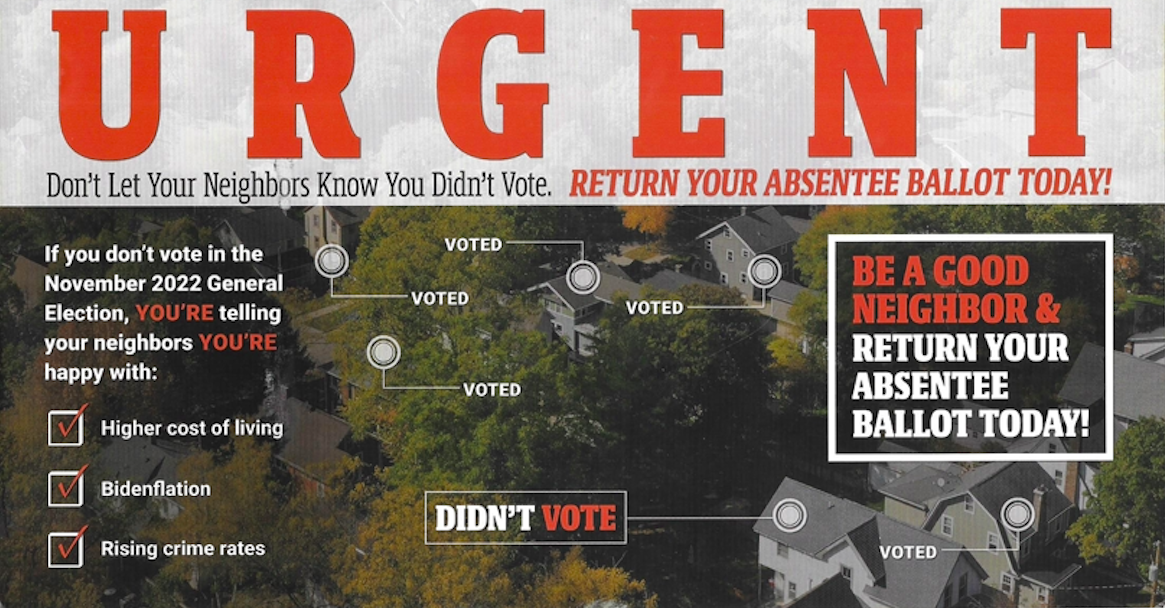 On the flip side, the mailer blares, “WHETHER YOU VOTED IS PUBLIC INFORMATION.” It continues, “BE A GOOD NEIGHBOR & RETURN YOUR ABSENTEE BALLOT TODAY! YOUR NEIGHBORS ARE COUNTING ON YOU.” 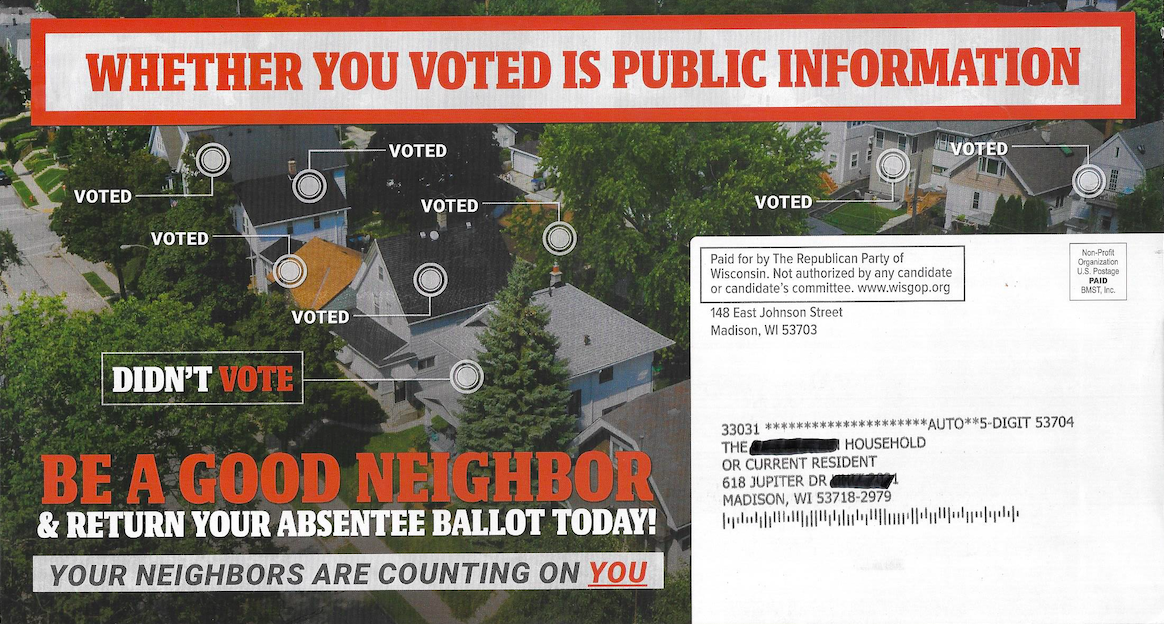 Both sides of the mailer ominously depict an aerial view of houses marked with the labels “VOTED” or “DIDN’T VOTE.”

The mailer does not instruct voters how they should vote, but it is labeled as coming from the Republican Party of Wisconsin and it does frame the issues in a telling way: “If you don’t vote in the November 2022 General Election, YOU’RE telling your neighbors YOU’RE happy with” the status quo represented by three checked boxes: “Higher cost of living,” “Bidenflation” and “Rising crime rates.”

Unlike the usual political messaging, which aims to stir up fear over what may happen if certain candidates are elected, the GOP mailer threatens the recipient directly, with the consequences that may come from being identified as a nonvoter.

“I do find it troubling because it suggests the voter receiving the mailer is being monitored and will be harassed if he or she does not return their absentee ballot,” said Jay Heck, longtime executive director of Common Cause in Wisconsin. “It is fine to encourage voting out of a general sense of civic duty or to have your voice heard at the ballot box. But this mailer suggests that the GOP is watching and if you fail to vote you will be publicized and ostracized for not doing as they say. That borders on intimidation and some voters would likely find it disturbing and threatening.”

Matthew Rothschild, executive director of the Wisconsin Democracy Campaign, had a similar response: “It’s a creepy mailer, trying to guilt-trip residents of a long-term care facility into voting by telling them that their neighbors will know if they don’t vote when, in actual fact, I’ve never heard of anyone ever checking up on whether their neighbor voted or not.”

The Republican Party of Wisconsin did not respond to a detailed phone message seeking comment.

Whether or not a particular person has voted, and in which elections, is public information. But obtaining aggregate voter information through the Wisconsin Elections Commission’s Badger Books site involves paying a fee of at least $25, with a maximum charge of $12,500. It is possible to find the voting record of individual people through the “MyVote Wisconsin” feature on the commission’s website. But this feature, says WEC spokesman Riley Vetterkind, is designed to be used by voters to check their own history, and it requires entering a date of birth.

A 2008 study published in the American Political Science Review found that “social-pressure” strategies were far more effective than conventional methods at getting out the vote, based on an experiment involving different kinds of appeals sent to several hundred thousand Michigan voters.

“Substantially higher turnout was observed among those who received mailings promising to publicize their turnout to their household or their neighbors,” the study found. “These findings demonstrate the profound importance of social pressure as an inducement to political participation.”

Heck suspects the GOP mailer was targeted to voters in “more Republican leaning areas,” to scare up the vote among the party faithful.

Debra Cronmiller, executive director of the Wisconsin League of Women Voters, said she cannot comment on any message issued by a political party. But, she said, “We want everyone to vote,” and there are many different strategies that are used to get people to do so. She stressed that while it’s possible to find out whether someone else has voted, “you have no idea how that person voted. The content of your ballot is always confidential.”

Barbara Beckert, director of external advocacy with Disability Rights Wisconsin, said she and other advocates for older adults with whom she shared the GOP mailer have a mixed reaction. Urging people to return their absentee ballots, she noted, “is a really important message because we know that a lot of absentee ballots don’t get returned or they don’t get returned in time.”

But the mailer’s suggestion that your neighbors will be checking to see whether or not you vote “may be confusing and feel a little bit uncomfortable to people. [It] might make people feel kind of uneasy.”

Beckert added, “I don’t think anyone felt like it was like a big show stopper or anything. There’s so many alarming messages that go out now that it’s pretty competitive, right?”

Bill Lueders, former editor of The Progressive magazine and current editor-at-large, is a Wisconsin writer who lives in Madison. He also serves as the elected president of the Wisconsin Freedom of Information Council, a statewide group that works to protect public access to government meetings and records.

She helped create The Big Lie. Records suggest she turned it… by Cassandra Jaramillo June 9, 2022
Election deniers failed to hand Wisconsin to Trump but have… by Megan O'Matz October 6, 2022
‘A hammer in search of a nail’: AG candidate prosecutes… by Matt Mencarini July 11, 2022