Consumers say they plan to pull back on spending – acting as if the U.S. were already in a recession

Black Friday is one of the busiest shopping days of the year. (Bebeto Matthews | AP File Photo)

Retailers are gearing up for another blockbuster holiday shopping season, but consumers burned by the highest inflation in a generation may have other ideas.

Industry groups are predicting another record year of retail sales, with the National Retail Federation forecasting a jump of 6% to 8% over the US$890 billion consumers spent online and in stores in November and December of 2021.

But Jeff Bezos, founder and chairman of the biggest retailer of them all, seems to be anticipating a much less festive holiday for businesses. In November 2022, Amazon said it is laying off 10,000 workers, one of several big companies announcing job cuts recently. Bezos even cautioned consumers to hold off on big purchases like cars, televisions and appliances to save in case of a recession in 2023.

Results from our new survey suggest consumers appear to be already taking Bezos’ advice, as a combination of soaring consumer prices, rising borrowing costs and growing odds of a recession weighs on their wallets. And if our survey results do pan out, it may mean the recession everyone’s worried about happens sooner than expected.

We conducted our survey in mid-November, about a week before Black Friday, the historical start of the holiday shopping season. The day after Thanksgiving is known as Black Friday because it signals the period when retailers hope to sell enough goods so that their income statement shows “black,” or profit, for the year rather than “red,” which refers to losses.

We asked over 500 consumers a series of questions about their spending plans, concerns and priorities during this year’s holiday season. Participants were split evenly between men and women, and almost two-thirds had a household income of $70,000 or less.

Overall, the most alarming conclusion from our research is that consumers are reporting consumption behaviors typically exhibited during an economic crisis, similar to those observed in 2009 by consultancy McKinsey during the Great Recession.

One data point stands out: An overwhelming 62% said they were concerned about their job security, while almost 35% indicated they were “very” or “extremely” worried about their financial situation.

Here are three behaviors we found in our survey that suggest consumers are behaving as if the U.S. economy is already in a recession.

Not surprisingly, cutting spending is the first thing consumers do during economic turmoil.

A study by McKinsey in early 2009 found that 90% of U.S. households cut spending due to the Great Recession, with 33% of consumers indicating a significant cut.

Similarly, respondents to our survey said they plan to spend, on average, around $700 this holiday season, substantially lower than the roughly $880 consumers spent during each of the past three seasons – including early in the pandemic in 2020.

About a third of our sample intended to spend “slightly” or “much” less than in 2021, while 35% said they would spend “about the same” – which from a retailer’s perspective means spending less because last year’s dollars don’t go as far today. The rest said they planned to spend a little or much more.

Inflation is one of the key reasons consumers say they are spending less. Almost 80% of respondents said they are either moderately, very or extremely concerned about the surge in prices, and 87% said those concerns would affect their holiday spending behavior, such as by buying gifts for fewer people or purchasing less expensive items.

Some of our respondents even said they were planning to make their own gifts or buy used goods, rather than shop for new items. The secondhand market has boomed in the last few years, and many shoppers view this option as a way to combat inflationary pressures. 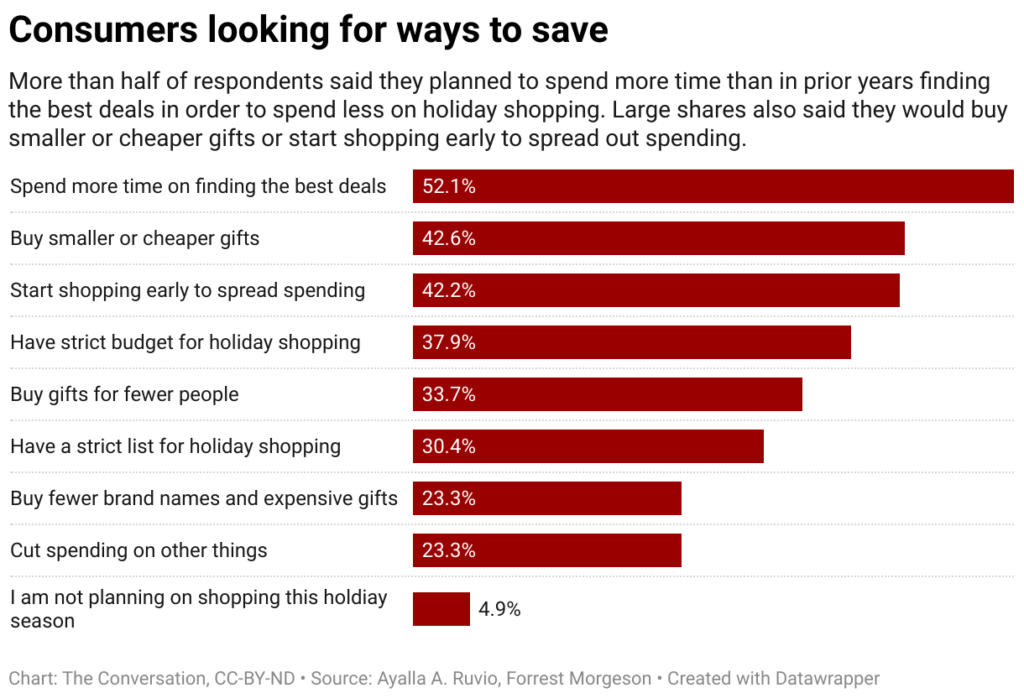 Another thing consumers do when they sense a troubled economy is they plan their purchases more carefully and maintain self-control over spending.

Common strategies include spending more time searching for the best deals, adhering to strict shopping lists, prioritizing necessities and making purchases earlier to spread out their spending – all of which were mentioned by our survey respondents.

We may already be seeing signs of this last strategy. Retail sales for October were up 1.3% from the previous month and up 8.3% from October 2021, which may reflect consumers’ early holiday shopping. If that is the case, this early shopping may result in slumping sales in December.

Also, purchasing early, aided by the plethora of steep discounts offered well in advance of Black Friday, allows consumers to control their shopping behavior better and reduces the risk of impulse buying. Reduction of impulse buying is a strong indicator that consumers are shopping like the economy is in recession.

In our survey, we found that over 50% of participants said that they would be using savings to cover the cost of holiday spending, with many stressing that they would pay with cash. Using cash as a primary form of payment is the main tool consumers have to control spending.

Only 15% of our respondents said that they would use buy-now-pay-later options, which to us is another sign that consumers are preferring cash over forms of credit that creates a new debt. 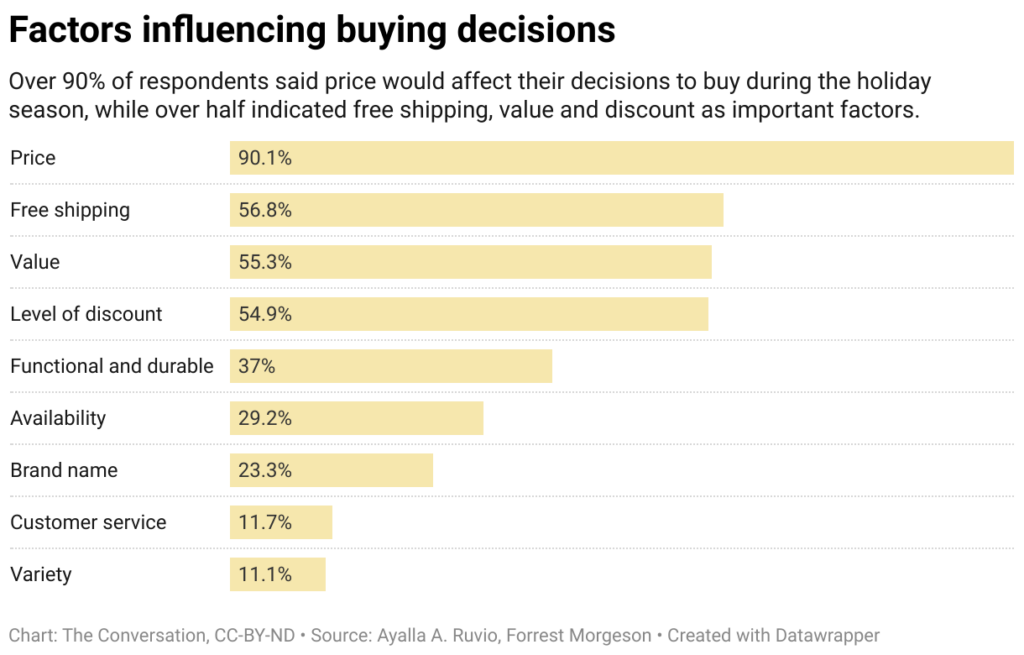 During economic crises, consumers become hypersensitive to prices, which trump most other considerations in the minds of consumers.

A whopping 90% of our respondents confirmed that price is their major consideration when shopping during the holidays this year. Other elements of price sensitivity are free shipping, product value and the level of discount, if any.

The singular focus of consumers on price gives retailers a wide range of potential responses, including promoting house brands and private labels that are perceived as having greater value for money. In fact, according to the 2009 McKinsey report, one of the biggest shifts in consumer behavior during and after the 2008 recession was the switch in preference from high-priced premium brands to value brands that tend to have lower prices but still decent quality. During an economic slowdown, consumers typically stop buying brands they are not strongly connected with or loyal to.

Consumers in our survey said buying brand names will be one of the least important influences on their purchases this season.

While economists debate whether a recession is coming, or even whether the U.S. is already in one, our data suggests consumers are beginning to behave like one is already here. That risks becoming a self-fulfilling prophecy as consumers tighten their belts.

Dr. Ayalla Ruvio is Associate Professor of Marketing and the Director of the MS of Marketing Research Program at Michigan State University. She is an applied consumer behavior researcher who focuses on issues such as identity and consumption, material vs. experiential consumption, consumer arrogance, and cross-cultural consumer behavior. Her research has been published in refereed journals, including the Journal of Academy of Marketing Science, the International Journal of Research in Marketing, the Journal of Product Innovation Management, and Leadership Quarterly. She is the co-author of the textbook "Consumer Behavior and Insights", and the co-editor of the book "Identity and Consumption." Her research has featured in numerous media outlets all over the world, including CNN, TODAY show, Good Morning America, TIME magazine, The New York Times, Forbes, Consumer Reports, The Daily Telegraph, The Atlantic, The Telegraph, and the Toronto STAR.

Forrest V. Morgeson III is Assistant Professor in the Department of Marketing, Eli Broad College of Business, Michigan State University, where he teaches marketing management, marketing strategy, and marketing research courses. His past position was Director of Research at the American Customer Satisfaction Index (ACSI), where he managed ACSI’s academic research and team of researchers, advanced statistical modeling and analysis, and the company’s international projects and licensing program.