One very human moment from Gov. Tony Evers’ virtual news conference on Wednesday came in his answer to a question posed by Mark Halvorsen from WWIB radio in Chippewa Falls.

During these conferences, held multiple days every week during the pandemic crisis and often exceeding an hour in length, each news outlet can have one reporter ask one question.

When called on, Halvorsen said, “Thank you Gov. Evers, a haircut may seem like a small matter but it’s something that affects nearly everyone in the state, not to mention the thousands who are gainfully employed in this field. I hear many talking about how badly they need a haircut or their kids do, or those talking about needing a hair coloring. What can you tell us about how you and your staff have navigated this challenge of not using personal-care professionals. Thank you.”

Evers, with a deadpan reply, offered this hot styling tip:

“Get up every day and comb your hair.” 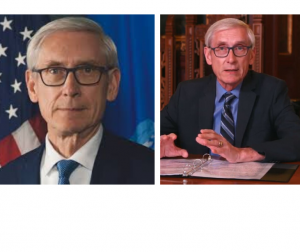 On social media, a chorus of users have been claiming Evers had somehow gotten his haircut when the public could not because salons and barbershops are closed under the Safer at Home order. Some even posted pictures of Evers showing his short, quaffed hair, not noting they were more than a year old.

When dog groomers were allowed to reopen recently with strict rules that kept humans socially distanced, Twitter users screamed unfair — dogs could get haircuts, but not people — apparently missing the point that a person cannot get a haircut from a safe social distance.

At the Reopen Wisconsin protests — a woman in Brookfield with long hair piled up on her head held a sign saying, “I want a haircut,” and at the Capitol protest another sign read, “Brother, can you spare a haircut.”

Evers seemed either surprised or amused — or perhaps both —  as he attempted to elaborate on the reporter’s question:

“I don’t know what else to say. That’s what I do. I haven’t been to a stylist, or a barber in months and months, probably well before the pandemic, so I wash my hair every day, and comb it and go to work.”