Getting meds out of our water 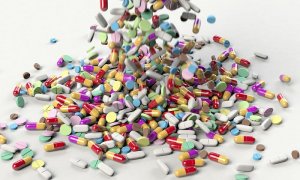 Wisconsin’s water contamination battles don’t end with lead pipe removals or cleaning up wells. Unused prescription medications, thrown in the trash or flushed out to Lake Michigan, are yet another pressing problem.

According to a study by the School of Freshwater Sciences at the University of Wisconsin-Milwaukee, traces of prescription medications have been found just two miles from Milwaukee’s treated wastewater outfalls.

“Pollution from prescription drugs threatens public health and the safety of drinking water for people in Milwaukee,” according to Amber Meyer Smith, vice president of Programs and Government Relations at Clean Wisconsin..

Clean Wisconsin was founded on Earth Day in 1970 to address lake and river pollution statewide. Their solution to the modern issue of pill pollution is simple: promote the use of pill drop boxes. Gov. Tony Evers, who declared 2019 the ‘Year of Clean Drinking Water’ in Wisconsin, joined the organization and its offshoot Take Back My Meds and has highlighted the need for a network of drop boxes across Milwaukee.

Drop boxes can be found near local pharmacies and sometimes other locations as well. Take Back My Meds’ website calls them “the most effective method for collecting used medication,” on their website. The group also offers residents the opportunity to sponsor a box somewhere in the city.

Recent data compiled by the Drug Enforcement Administration and published by the Washington Post showed that between 2006 and 2012, the Badger State was swimming in over 1.2 billion pain pills. Most of them were distributed by Walgreens, and manufactured by a two-year-old company SpecGx LLC. Not all the medications that pollute waterways nationwide, however, are opioids. Fish and mussels in Seattle Washington’s Puget Sound tested positive for a variety of drugs. The analysis, conducted last year, found aquatic life in the sound were exposed to antidepressants, painkillers and even cocaine.

“When unused drugs are thrown in the trash or flushed down the toilet they end up in Lake Michigan, the source of Milwaukee’s drinking water,” says Myer Smith. “Drop boxes are the key to keeping pharmaceutical contaminants out of our drinking water.”

Getting meds out of our water