Smith slammed the Joint Committee on Finance GOP majority for voting against releasing mental health funding for farmers: “The funding would have allowed the agency’s Farm Center to establish a hotline staffed by professionals to aid farmers facing a mental health crisis. The funding would have provided vouchers for farm families to cover the cost of counseling sessions and reduce the risk of suicide … Farm bankruptcies are growing. The suicide rate for farmers continues to rise. It’s unacceptable for Republicans to turn their backs on our small dairy farmers and block funding for critical mental health services.”

At bat for Republicans was Speaker Pro Tem Tyler August (R-Lake Geneva) with his message “Use transportation funds as intended.” This was another shot, this one at Gov. Tony Evers, addressing another hot-button topic this week — the allocation of transportation dollars for communities across the state. 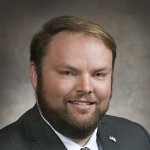 Republican legislators budgeted $90 million for a local road improvement program, which Evers cut to $75 million and plans to award based on potential economic interest. Republicans began stoking fears that the money might go to Milwaukee for expanding its new streetcar system, which critics have long belittled as “trolleys” – and Fitzgerald tweeted “The governor is taking money from local road construction to fund Milwaukee’s trolley to nowhere. Rural Dems should push back – veto override!”

“After promising to ‘fix the darn roads, Gov. Evers used his veto to cut $15 million that should have gone to fix our local roads…The creation of this new slush fund by Evers Administration, means that your tax dollars could be diverted to special projects in Milwaukee and Madison.

“The funds could even be used for non-road projects like bicycle or pedestrian projects. This is wrong.”

Department of Transportation Secretary-designee Craig Thompson has said that criteria will be used to ensure rural areas get funding.