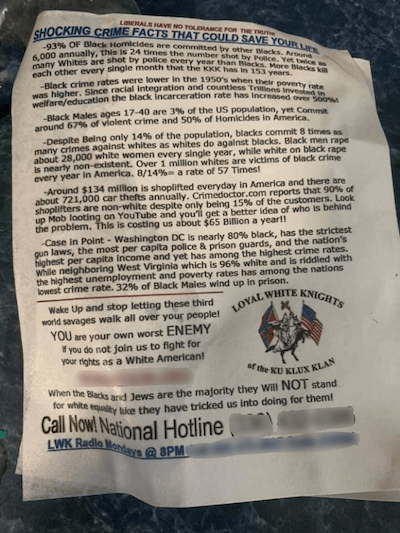 On Monday, Dane County resident Christian Foust came home to find “white supremacist recruitment propaganda thrown at the end of my driveway.” Foust, who lives in southern Dane County, guessed it was “tossed out of a car window” and described it as “straight KKK recruitment.”

The flyer included hate speech directed at African-Americans and Jews, racist slurs, cautions against interracial dating, racist imagery and statements including, “The Loyal White Knights Would Like You To Remember…LOVE YOUR OWN RACE…KEEP ARYAN BLOOD PURE.” Complete with a hotline number and website, the flyer stated it was from the “Royal White Knights of the Ku Klux Klan.”

An earlier Wisconsin Examiner report this week highlighted the Southern Poverty Law Center’s Hate Map, which cited 15 hate groups in Wisconsin. Nowhere on that list was the KKK.

Madison365.com Associate Publisher & Editorial Director Robert Chappell checked with law enforcement about the flyers and was told that at least 10 had been discovered in Dane County and were reported to either the Madison Police Department or the Dane County Sheriff’s Office.

“Mass shootings in El Paso, Texas and Dayton, Ohio left nearly 30 people dead earlier this month,” Chappell pointed out in his article. “The El Paso shooting appears to have been racially motivated and targeted Latino immigrants and citizens.”

In an interview, Chappell says during the four years he’s been at Madison365, a publication focused on communities of color in Madison, he sees some kind of incident of racial hatred a couple times a year, although in the past it has mostly been graffiti. These recruitment flyers are an augmented effort, he says, someone having gone to the effort to put them in plastic baggies, weigh them down with fish tank rocks and throw them in driveways. But he adds, “an overt action such as this” does not mean that anyone can “use it as a foil to dismiss more casual racism because it is not as obvious as recruitment for the KKK.”

Sheriff Dave Mahoney advises that anyone finding KKK or other hate propaganda should call his department. (608) 284-6800. “We’re going to collect it and we’re going to treat it as an incident that we’re going to follow up on. It makes our community less safe.”