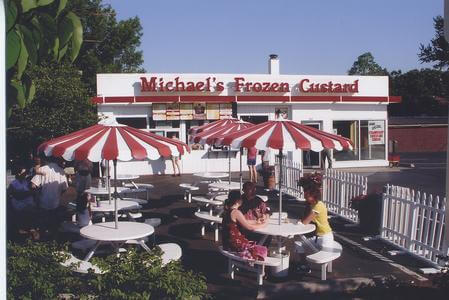 The news that Michael’s Frozen Custard on Monroe Street in Madison will be closing after the owner’s husband was barred from returning to the United States stunned neighborhood residents.

“That’s just been a gathering place for our neighborhood forever,” said Andrea Gunn, a high-school science teacher and mother of three who lives a few blocks from the store.

Particularly on the Fourth of July, Michael’s has been the place to gather for families with young children, Gunn recalled.

“The little kids would decorate their bikes there, and we’d do a whole parade.” Michael’s provided red, white and blue decorations, scissors and tape, she said.

But Michael’s proprietor Michael Dix’s husband, who has lived and worked in the United States for the last 30 years, is not welcome in this country anymore, the couple learned recently.

Dix and his husband, Sergio De La Hernandez, were told Hernandez could not get a visa to return to the United States after taking a trip to Mexico, Channel 3000 reported yesterday.

Dix and Hernandez have been married since 2015. Dix sponsored Hernandez for a visa after their marriage. Hernandez had been living in the United States as an undocumented resident for 30 years. In 2018, Hernandez’s visa application was denied. The couple is currently in Mexico.

Hernandez helped Dix run Michael’s and his absence made it too hard to keep operating the store, Dix said in a statement.

Ceili Cordero, a sophomore at the University of South Carolina, grew up near the Michael’s store on Monroe Street and worked there when she was in high school.

“It was cool because it’s such a neighborhood staple. I’d see a lot of people I knew,” she told the Examiner.

“My friends texted me about it and they were heartbroken,” she added. “It’s just always been there for us. It’s a family business that’s closing in our neighborhood. It’s just really sad.”

Gunn said she’d had conversations with family members who said that however ugly politics have gotten during the Trump administration, “it won’t affect us. This is directly affecting us!” she said. “That’s our neighborhood!”

Cordero echoed that sense of shock.

“This isn’t something you’d expect in Madison,” she said. “I live in South Carolina now and I would expect that would happen down here.”