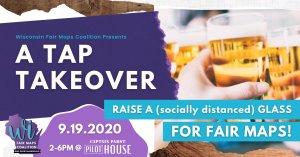 Calling citizens of all parties or no party who want fair maps that allow the people to pick their representatives, rather than the other way around (as in Wisconsin and other states with gerrymandered maps). You can soon drink to that, with a beer that sends funds and spends time on voter education by the Fair Maps Coalition.

“Fair Maps Beer Week” involves six breweries in five cities across Wisconsin, which are holding events Sept. 19 and Sept. 20 to raise money for the coalition. The group is made up of more than a dozen good government groups in Wisconsin that support an end to gerrymandering and replacing that practice with independent, nonpartisan redistricting.

The events are being held as a kickoff leading up to the first hearing of The People’s Maps Commission on Oct. 1.

“This collaboration is elevating the issue of gerrymandering and educating voters in a novel way,” said Holly Bland, deputy director of the Fair Elections Project. “We believe that it’s important for Wisconsinites to understand the impacts of rigged maps and want to expand the conversation.”

All events will take place with socially distanced toasts outdoors. Each brewery is doing something different —  donating from sales of different specific beers or contributing tips and hosting voter awareness events over the coming weekend.  At least one will continue to raise money for the cause for the next several months. Participating breweries and events (linked) include:

Fair maps drawn in a nonpartisan fashion are popular in Wisconsin, where the last round of map drawing was conducted away from the Capitol in a high-priced law office where Republican representatives who participated were forced to sign secrecy pledges. Taxpayers have been billed more than $4 million in legal fees to defend those maps, which are among the most skewed to favor one party in the nation.

Fair map resolutions have been passed by 54 county boards, 17 counties’ citizen referenda and there are 11 more referenda on the November 2020 ballot.

“There is a huge groundswell of support for banning gerrymandering in Wisconsin,” said Carlene Bechen, with the Wisconsin Fair Maps Coalition. “Activists in every corner of the state and of all different political affiliations have been working hard to get this issue on the ballot. They just want a level playing field, and they’re sick and tired of having their voting districts chopped up to favor one party or another.”

There is also a huge groundswell of support in Wisconsin for beer.

Raise a toast to non-gerrymandered maps