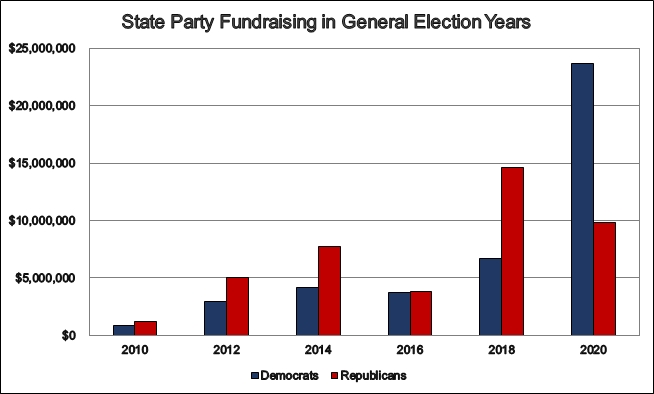 Fundraising by the two major state parties combined has skyrocketed in recent years, from more than $2 million in 2010 to about $33.5 million in 2020.

The leap in fundraising is the result of sweeping changes to campaign finance laws enacted in 2015 by former Republican Gov. Scott Walker and the GOP-controlled legislature. Those changes included allowing individuals to give unlimited amounts to political parties (the old limit was $10,000) and allowing political parties to accept contributions from corporations for the first time in more than 100 years.

Most of the contributions during this final 10-week period in 2020 to both parties came from candidate and political action committees. The Democrats received more than $3.6 million from political committees, compared to more than $3 million for Republicans.

Meanwhile, the state Democratic Party had more than two dozen individual contributions of $10,000 or more between Oct. 20 and Dec. 31.

The top contributors were:

Dale Leibowitz, of Madison, founder of the Purple Moon Foundation, $50,000.