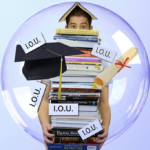 A 12-person panel, including state and local officials and community members, gathered at Milwaukee’s Washington Park Library to discuss tackling the student-loan debt crisis. The meeting drew a crowd of about 30, including current loan borrowers, social workers, teachers and the parents of indebted students.

Panelists, including Alex Brower, a substitute teacher in the Milwaukee Public School district, shared their own stories of how debt has hampered their lives. “When you have to choose between rent and food,” he told the audience, “student loan debt gets paid last.” Brower pointed out that Googling “Great Lakes” will get you a student loan entity at the top of the search suggestions, which demonstrates how worried people are about the issue. Collectively, more than 1 million Wisconsinites are buried under more than $24 billion in student loan debt.

Panelist Becky Cooper shared how the financial stress of her loans eventually invaded other parts of her life. Her two college-aged children watched her struggle with financial burdens that strained her relationships as they were growing up. Today her two sons are in college, one a junior and the other a freshman. When her younger son started backing off his dreams of attending a top engineering school, Cooper asked him why. “He said, ‘I don’t want to carry that debt. I know you’re still paying, and I don’t want to carry that for the rest of my life,’ ” she told the Wisconsin Examiner.

Natalie Reinbold, panelist and coordinator of UW-Milwaukee’s Life Impact Program, has heard similar statements from her students. One student told her, “Please don’t let me die without paying for my loans. I’m grateful but I feel shackled.”

Student debt is getting worse as time goes on. According to Bloomberg, college tuition and fees have gone up over 1,000% since 1978. Between 2008 and 2010 alone, tuition and fees increased by 15%, HuffPost reports. The growing cost has an isolating effect on a whole generation of students, who say their parents do not grasp how bad the debt crisis has become.

“It changes the trajectory of your life,” said Department of Financial Institutions Secretary-designee Kathy Blumenfeld. Sitting next to Connie Hutchison, executive secretary of the Higher Educational Aids Board and State Treasurer Sarah Godlewski, Blumenfeld called the quotes from indebted students “crushing” to hear. Hutchison, who led the meeting, told the group that Gov. Tony Evers’ administration is committed to  addressing the student loan debt crisis.

The panel listened and took diligent notes on suggestions from the audience. But there does not  appear to be a silver bullet. Republicans in the state legislature stripped out a provision in Evers’ state budget that would have allowed Wisconsinites to refinance their student loans to get better interest rates, just as homeowners can refinance their mortgages to lower their monthly payments.

One problem mentioned by several audience members, as well as  panelist Jane Lemke, is that high school students don’t have enough  information to even know where to begin grappling with the debt they might be taking on as they enter college. Representing the student loan entity Commonbond, Lemke described a flexible array of options for loans and payments students are often unaware of.

Brower argued for significant changes to the system, more oversight, and zero-interest loans.

Student debt has become a profitable business for predatory lenders who take advantage of students.

“Today, I heard about a lot of resources that I didn’t know existed,” audience member Dorothy Dean told the Wisconsin Examiner. Dean, who is the former treasurer of Milwaukee County, is familiar with predatory lenders, but doesn’t want debt to keep students from pursuing their dreams of going to college.

“Do not give up,” she said.“This is not an individual issue. Your success as a student contributes greatly to the rest of us.”

Tuesday’s meeting was just one of four roundtable talks across the state. Others took place in Green Bay, La Crosse and Wausau, with more planned by the task force.